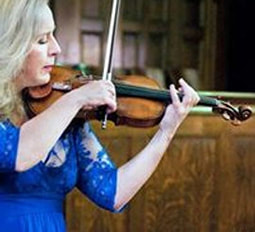 Stephanie Chase, Violin.
Ms. Chase is internationally recognized as “one of the violin greats of our era” (Newhouse Newspapers) through solo appearances with over 170 orchestras that include the New York, London, and Hong Kong Philharmonics and the Chicago, San Francisco, Atlanta, Baltimore, and London Symphony Orchestras. Her interpretations are acclaimed for their "elegance, dexterity, rhythmic vitality and great imagination" (Boston Globe), "stunning power" (Louisville Courier-Journal), "matchless technique" (BBC Music Magazine), and “virtuosity galore” (Gramophone).

“Renowned for her impeccable intonation” (Temperament, Stuart Isacoff), her playing is also characterized by “great intensity and a huge tone, the epitome of the modern violinist” (The Baroque Cello Revival, Paul Laird).  A top medalist of the prestigious VII International Tchaikovsky Competition in Moscow, Ms. Chase has performed concerts in twenty-five countries throughout the world and is a recipient of the esteemed Avery Fisher Career Grant.   As soloist she has collaborated with conductors that include Zubin Mehta, Leonard Slatkin, Leon Barzin, Herbert Blomstedt, Frans Brüggen, Marin Alsop, Enrique Diemecke, Christopher Hogwood, Roy Goodman, Hugh Wolff and Stanislaw Skrowaczewski.  With conductor Kenneth Schermerhorn, she was a featured soloist with the Hong Kong Philharmonic on its first trip ever to the People's Republic of China - an historic event that garnered worldwide attention. 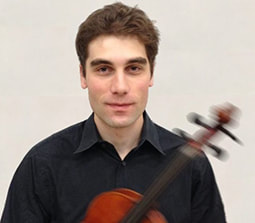 Noah Fields, Violin.
Noah is entering his third season as a violinist in Symphoria, the symphony orchestra of Syracuse, NY. As both violinist and violist, he has collaborated with artists such as Hsin-Yun Huang, Amy Schwartz Moretti, members of the Cavani Quartet, as well as members of the Toronto Symphony Orchestra, the Orchestra dell’Accademia Nazionale di Santa Cecilia, and the Canadian Opera Company Orchestra. In recent seasons he has performed as a chamber musician at the Rome Chamber Music Festival (Italy) and the Geneva Music Festival (New York). As a student in the studio of Scott Woolweaver at Williams College, he has appeared as a soloist with the Berkshire Symphony. 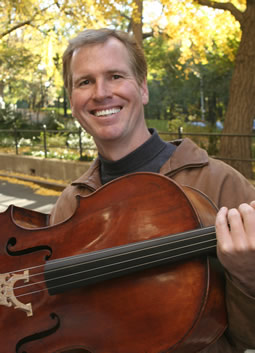 Scott Kluksdahl, Cello.
Scott Kluksdahl has performed for nearly four decades as chamber musician, recitalist and soloist in the United States, Europe, Israel, and Central and South America.
Kluksdahl presented his solo debut with the San Francisco Symphony, and since then he has performed a broad gamut of his instrument’s repertory throughout the entire United States and in the major musical centers of New York City, Boston, Chicago, Cleveland, Philadelphia, Pittsburgh, San Francisco and Washington, D.C. He has been heard in Lincoln Center’s Alice Tully Hall, Merkin Concert Hall, Kennedy Center, Dame Myra Hess Series, Phillips Collection and Tanglewood Music Festival, and continues to perform the complete cycle of Bach Suites for cello, notably at the Oregon and Philadelphia Bach Festivals.. . Additionally, he oversees a series of three community programs as the artistic director of ‘If Music Be the Food…’ a collaborative chamber music outreach that brings attention and assistance to hunger issues in the Tampa Bay community and the greater west coast region of Florida. 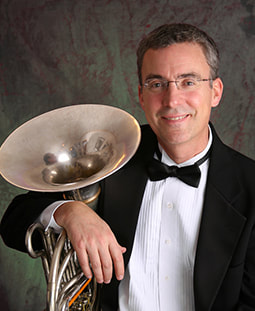 Paul Stevens,  French Horn
As an orchestral player Paul Stevens has performed with leading orchestras -- : the New York Philharmonic, Los Angeles Opera, Joffrey Ballet, San Francisco Symphony, American Ballet Theatre, Houston Symphony, Los Angeles Master Chorale, Hollywood Bowl Orchestra, Oregon Symphony and the San Diego Opera. He has performed on principal horn under such conductors as: Leonard Bernstein, Zubin Mehta, Edo DeWaart, Kent Nagano and Stanislav Skrowazewski.
As a chamber musician he is a Permanent Member of the Martha's Vineyard Chamber Music Society and a longtime member of the San Luis Obispo Mozart Festival/Festival Mozaic..
During more than a decade in Hollywood, he played on many motion picture soundtracks and television films, and worked with such composers as:, John Williams, and  Henry Mancini. His audio projects range from Placido Domingo to Michael Bolton to the rap group "Outkast." 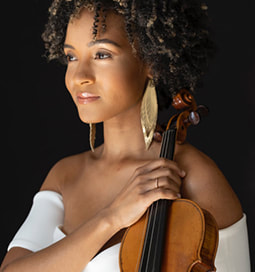 Melissa White,  Violin
Melissa is a founding member of New York-based Harlem Quartet, where since 2006 her passion and artistry have contributed to performances that have been hailed for “bringing a new attitude to classical music, one that is fresh, bracing and intelligent” (Cincinnati Enquirer). Together with Harlem Quartet she has worked with such classical-music luminaries as Itzhak Perlman, Ida Kavakian, Paul Katz, and Anthony McGill.
Ms.  White has enchanted audiences and critics around the world as both a soloist and a chamber musician. Her February 2020 performance with the National Philharmonic was deemed “absolutely breathtaking” by Maryland Theatre Guide critic Katie Gaab, who cited the “grace, precision, and warmth” of her playing in Florence Price’s Violin Concerto No. 1; reviewing the same concert for The Washington Post, Matthew Guerrieri called her “an excellent advocate, prioritizing ease and fluency over intensity, suiting the music’s lyric and episodic nature.”
In fall 2020 Ms. White joined the Music Artist Faculty at New York University’s Steinhardt School of Culture, Education, and Human Development.
In addition to her musical career, Ms. White has enjoyed practicing various styles of yoga for more than a decade, and completed training in both Vinyasa and Ashtanga at Sampoorna Yoga School in Goa, India. She is the co-founder of Intermission, a ground-breaking program that unites body, mind, breath, and music-making through yoga and meditation. Intermission comprises sessions for students, retreats for professionals, and an app for everyone.
Her current instrument, “Matilda,” was commissioned as part of a Sphinx MPower Artist Grant in 2014 by the American violin maker Ryan Soltis.

In Boston he founded the Boston Composers String Quartet, which won the Silver Medal at the String Quartet Competition and Chamber Music Festa in Osaka, Japan and received recording and residency grants from the National Endowment for the Arts and the Aaron Copland Foundation.

Scott also performs, records and tours with the Chameleon Arts Ensemble of Boston, and Alea III, a contemporary music ensemble based Boston. He is Artist Affiliate in Viola and Chamber Music at Tufts University, and is a faculty member of the All Newton Music School in West Newton (MA), where he is Director of the Con Brio chamber music series. He has held the position of Artist Associate at prestigious Williams College in Williamstown, Massachusetts, Instructor of Viola at Eastern Michigan University School of Music and Dance (Ypsilanit, MI) and Guest Artist at the Massachusetts Institute of Technology in Cambridge (MA). He is a regular guest of the Martha’s Vineyard Chamber Music Society, where he has performed every season since 1999, and is Director of the Adult Chamber Music Institute at Kneisel Hall in Blue Hill, Maine.
​
Scott plays a Johan Georg Thir viola made in Vienna, 1737.

We have a limited number of reception tickets available.

Purchase Ticket
​During the  COVID-19 lockdown MVCMS began to broadcast concerts using internet media. Our first concert of 2021 – “Spring is Here!’  with the remarkable “Artists of Martha’s Vineyard String Quartet”   was pre-recorded and received its virtual premiere on Saturday March 20th.  Please click here for more information and to view the concert.